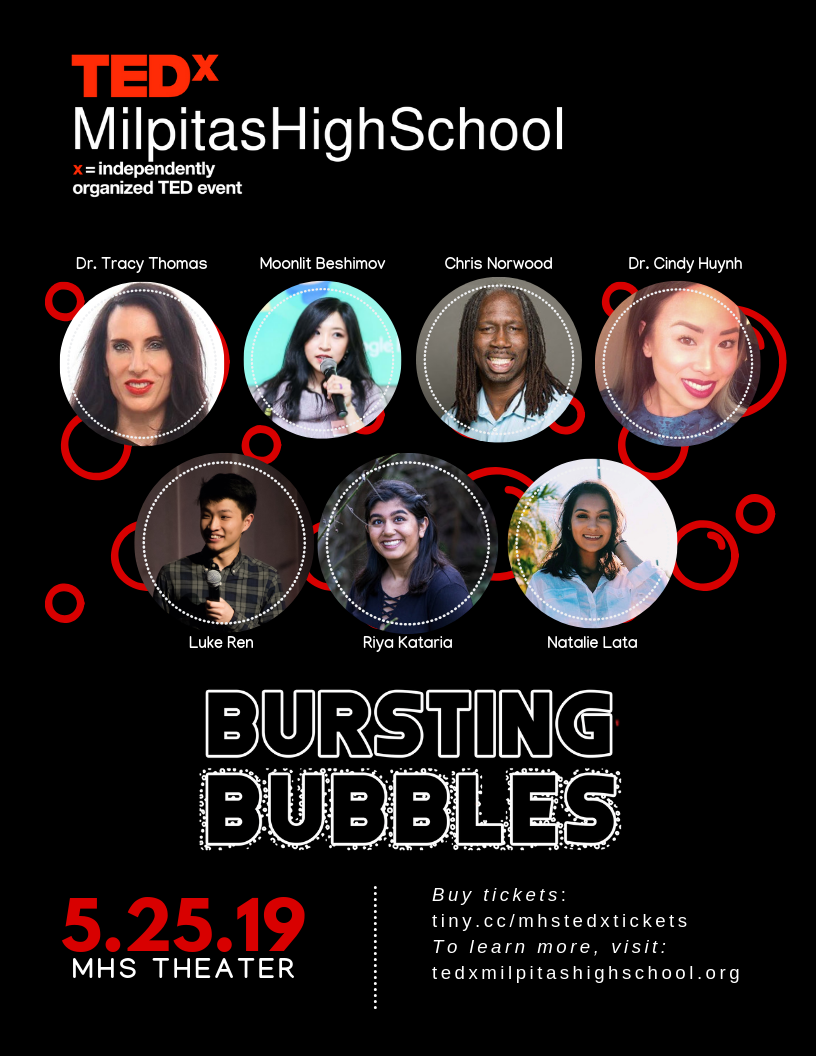 On May 25th at 10:30 AM, the “Bursting Bubbles” 2019 TEDx Milpitas High School Conference was held at Escuela Pkwy.  The mission of the conference to create a local community, welcoming people from every background and culture who seek a deeper understanding of the world. TEDx Milpitas High School believes passionately in the power of ideas to change attitudes, lives and, ultimately, the world. The High School values the celebration of locally driven ideas from MHS students to work towards an innovative future.  The Conference was held to empower students to think critically, form their own opinions, and come up with original ideas through this process.

Descriptions of the speakers can be found below:

1) Chris Norwood is an MHS Class graduate and a long time Milpitas resident. His academic roots began in Sobrante Park, located in East Oakland California. He is a motivator and champion of student and adult success. Chris is the product of divorce, Chicago Bears fan and passionate about project based learning, Digital Literacy and Computer Science as opportunity accelerators. Chris is currently a Level 2 Systems Analyst for Stanford UIT,, President of the MUSD School Board, Founder of Bay Area Tutoring Association, married 19 years and father of 2. He holds a B.S. in Christian Leadership and Biblical Theology.

2) Dr. Cindy Huynh is a second-generation Vietnamese American woman and first-generation college graduate from San Jose, California. She received her B.A. in Asian American Studies at UC Davis, M.A. in Asian American Studies from SF State, and Ph.D. in Education from the University of Utah. Dr. Huynh is deeply passionate about teaching and empowering young people to work alongside their communities for social change. She currently (and proudly!) serves as tenure-track faculty in Ethnic Studies at San Jose City College and has also taught Ethnic Studies at SF State and Gender Studies and Education at the University of Utah.

3) Dr. Tracy Thomas is a psychologist, a best-selling author, and the world’s leading expert on Emotional Strength Training. She knows how to get results, turning her clients into leaders who take charge of their own lives and change the very way they exist. She’s worked with executives, leaders, and celebrities, equipping them with the epic emotional strength they need to succeed. She’s been published in hundreds of national media outlets, and has inspired millions of people to create a powerful relationship with themselves. It is her life’s quest to train the first ‘emotionally educated’ generation, worldwide.

4) Moonlit Beshimov partners with mobile game developers in North America to grow their businesses on Google Play. Prior to Google, she worked at Scopely, Zynga and NERA Economics Consulting. Moonlit is passionate about applying analytics and behavioral psychology to mobile gaming engagement & monetization design. Moonlit has a MBA and BA in Economics from Harvard.

5) Luke Ren is the President of Comedy Club at Milpitas High School and the Founder and President of One-Up Coding, a summer coding tutoring program. His hobbies include coding random projects, playing piano, and playing video games with his friends. He is particularly interested in the machine learning field of computer science and spent a large portion of his time learning about different neural network architectures and algorithms. He loves public speaking and spreading knowledge through effective communication and hope to bring these skills to college and the workplace.

6) Riya Kataria is a student speaker and leader from Irvington High School. Growing up, Riya always understood the importance of telling a story. Now 17 years old, Riya has been recognized as one of the top 100 student leaders in the world and top 30 student speakers in the United States, leading her to meet former FLOTUS Michelle Obama, among other honors. Riya wants to emphasize the importance of speaking up because a silent majority is a forgotten majority. It’s up to us to amplify the voices of those who deserve to yell, not be stifled. Riya hopes to become senator one day, and until then, will keep pursuing her leadership and activism endeavors.

7) Natalie Lata is a Generation Z high school student on the brinks of graduation, an “almost adult” you could say. The best way to describe her is a passionate dancer, a leader, and an exceptional coffee enthusiast. Her ultimate life goal is to serve humanity through her love of medicine, and to travel the world. She will be attending Sacramento State University as a biomedical sciences major in the fall, and will be en route to medical school for her MD.